The Parts of a Gun and Rifle Magazine 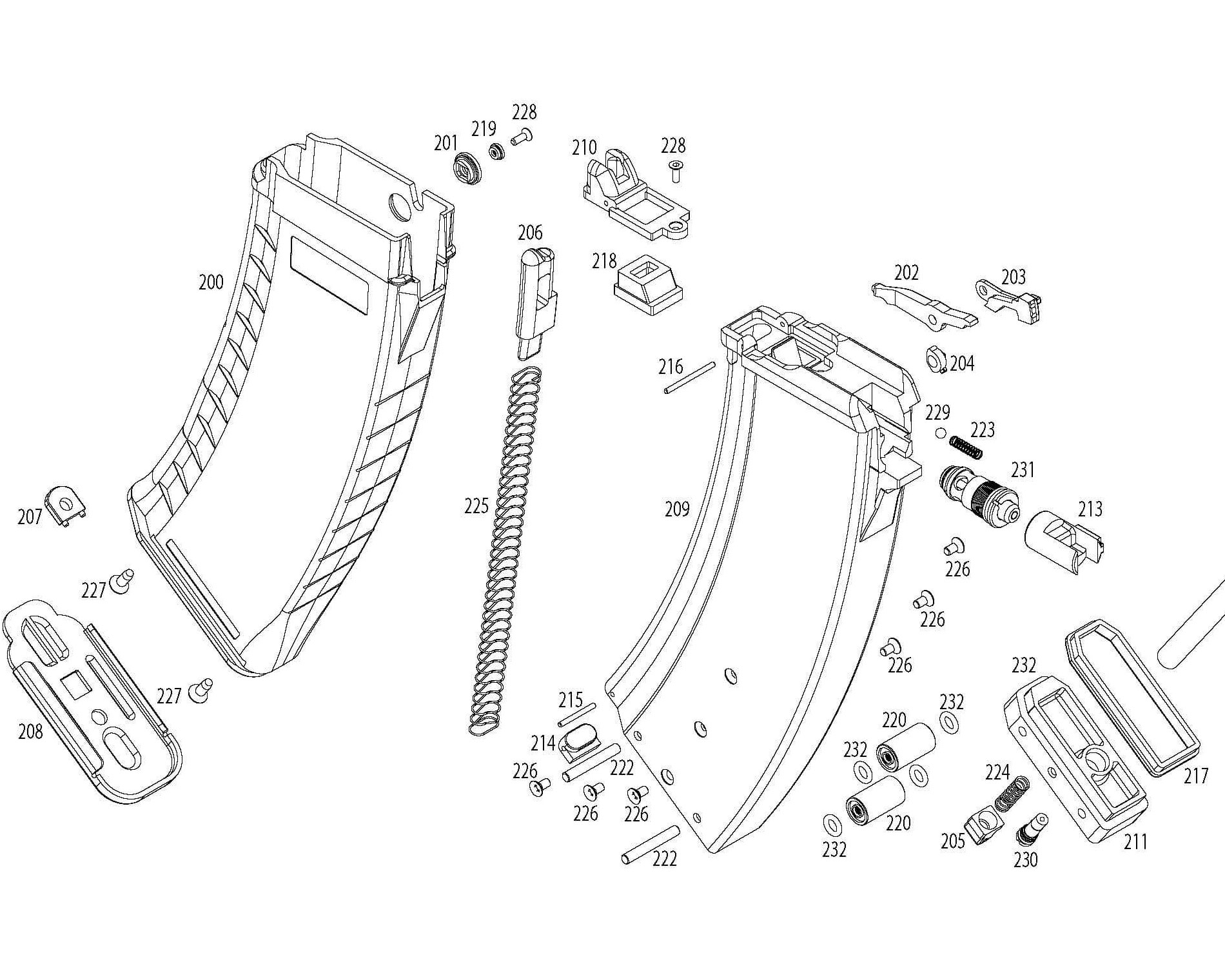 What Are The Parts To Your Gun and Rifle Mag?

Have you ever wondered what the parts to a gun magazine are? Well, not all ar magazines are made the same, so there are a few different gun magazine parts out there, but all magazines (or mags for short) have a few types of parts in common and a few have parts unique to that type of mag.

Now we are only interested in removable magazines in this article, not ones permanently built into the gun, also known as fixed magazines, because fixed mags are really another article all by themselves. Broadly speaking removable magazines can be one of four types, but there are two basic types and some variants that come into play. Of course this isn’t an exhaustive list, only a quick look at the most common sorts of mags out there.

You’ll usually encounter one of these types of removable magazines:

This means the ammo stacks one round on top of each other. These are commonly found in reduced capacity magazines for states with ammo capacity laws, rimfire rifles, and handguns. Sometimes handguns have single stack mags because they are narrower and make for a thinner gun for concealed carry, or because they have a larger caliber round that would require an excessively wide grip if in double stack. You’ll rarely find single stack mags over 12 rounds, with 10 or less being the most common. The biggest exception is some rimfire single stack mags will hold 25 or even more rounds.

These magazines stack ammo in a staggered column as opposed to one round on top of each other. These are very common mags and allow for holding more rounds in a smaller space than a single stack mag. You’ll find them on all manner of guns including handguns and rifles. Some double stack mags will hold as few as five rounds or so for use on modern sporting rifles when hunting, while others will hold 30 rounds or even more. Many double stack handgun magazines hold 15-19 rounds depending on the type of magazine.

These are almost always found in Ruger 10/22 rifles or rifles designed to use these common magazines. Instead of stacking rounds in a single or double stack column, rotary mags are designed to load ammo in a circle around a specially designed spring-loaded rotary sprocket.

Think of the iconic Thompson submachine gun with the big round magazine, and that’s a drum mag. Available in everything from rimfire to full power rifle rounds and even 12 gauge shotgun, drum mags are a great way to hold a lot of ammo in a smaller space than other types of mags.

Because drum and rotary magazines are so radically different from regular box magazines, we won’t be looking at them here. Instead, we want to focus on showing you the parts on the most common types of magazines. Single and double stack magazines generally have all or most of the following parts:

Let’s take a look at each of these parts and see what they do.

This is the largest part of the magazine and the most obvious. It is the part that holds all the other parts and the ammo. It locks into the gun and usually has feed lips on top that are shaped to control the flow of ammo and the angle it enters the gun’s chamber. If the mag body is dented or cracked, or the feed lips damaged, the magazine may no longer function and your gun might jam. Magazines can be made of metal or polymer or even a combination of both!

This is the bottom of the mag and holds all the various internal parts in by providing a closure to the bottom of the magazine. Rarely, you’ll find magazines without floorplates that are taken apart through a clever tilting follower but they are uncommon. The most notable example of a mag without a floorplate might be the mags used on the old British SMLE rifles of both world wars. Some floorplates are “extended floorplates” and lengthen the magazine to hold several extra rounds. Other floorplates might be shaped to provide additional gripping surface on the gun. These “fingergroove” floorplates sometimes also add ammo capacity, but not all do.

This is the part of the magazine that the ammo sits on top of. The follower rests on top of the internal spring, and maintains a constant position at the top of the magazine from spring pressure. Followers are a very important part of the magazine because if they are damaged or poorly designed they can cause the entire magazine to fail or the gun to jam. Some companies may make improved followers for some guns that improve performance under rapid fire. These are popular with competition shooters who have to complete a timed course of fire.

We’ve already alluded to the spring, but there is more to know about the magazine spring than that it pushes up on the follower. The magazine spring is there to provide a consistent upward thrust of pressure to allow reliable feeding of ammo. Make it too weak and it can’t move the follower up fast enough to feed the gun. Make it too strong and it moves the follower too fast and is hard to load. There is a sweet spot between too weak and too strong. Spring manufacturers measure the strength of the spring in pounds. Basically this refers to the amount of pounds per square inch needed to compress the spring in a given space. Factory mags generally have the proper spring weight to function, but performance shooters may wish to “tune” their mags by changing to a different spring weight.

Now that you know what parts are in most common magazines and how they interact with each other, it’s time to see how to take them apart and put them back together. You’ll usually start with an unloaded magazine. Of course, if a round has become hideously jammed up in your mag (rare, but it can happen, especially with semi-rimmed pistol rounds like the .32 and .380) you’ll have to take your mag apart to relive spring pressure and clear the jam. Start by turning your magazine over. The floorplate should have some sort of hole in the bottom with a little tab sticking out of it. That’s the lock plate interacting with the baseplate. Use the tip of a bullet, or some other blunt pointed object to depress the lock plate. As you do that, slide the base plate off and be careful of the spring. While not under tension, the spring will pop up once the floorplate is removed. Sometimes it can send the lockplate flying, but that’s uncommon. With the spring out, the follower will drop out and you’ll have taken your mag apart. There is rarely any reason to do this unless you are changing or replacing worn parts, or cleaning contamination like fine dust or mud out of your magazine. This is also when you’d install a capacity limiting device to comply with local laws that require reduced capacity magazines. Put the mag back together in reverse. Drop the follower in, put in the spring, press it down holding the lock plate, and then slide the floorplate back on. You might have to fiddle with the lock plate or tap the side of the magazine to get it all to align, but then you’re done!

Summing It All Up

Gun magazines usually aren’t complex devices. They are often quite simple, and easy to take apart and put back together. However, the design geometry of magazines can be quite complicated and that’s why it is important to only buy the best gun magazines on the market.

Check out the extensive assortment of high-quality magazines at GunMags.com. Chances are good that you will be able to find the one that suits your needs, or drop us a line and we’ll help you choose the perfect mag!